Languages of European Modernity (In: Bulgarian and Slovak Interpretations) 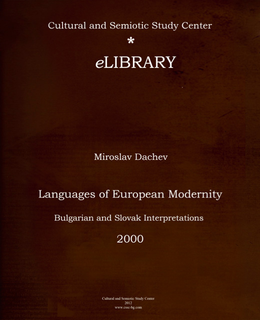 
Dachev’s assumption based upon the semiotic potential of language is closest to post-modern pluralism in the reception of modernity. Dachev’s programming text offers a structural and semiotic model of intercultural dialogues on the basis of a “modernist quest-within-language”. He gives it historical and methodological specificity in ‘Boundaries on Language in Modernist Consciousness” through the linguistic experimenting of symbolism and other “-isms” after it.